I found this recipe in my mother's cooking notebook: she never made those but recalls it from her parent's house, which means it comes from PRL (People's Republic of Poland) times = communist times. Some ingredients, also the obvious ones (eggs, butter, sugar) were hard to find so people were preparing dishes from few, sometimes bizarre, ingredients, which helps to veganize them. If a cake recipe calls for only one egg and soda instead of milk it's much easier to adapt it than a classic pie made out of 12 egg yolks, discard the whites. Just like this one: only beer, flour and margarine. And some marmalade. 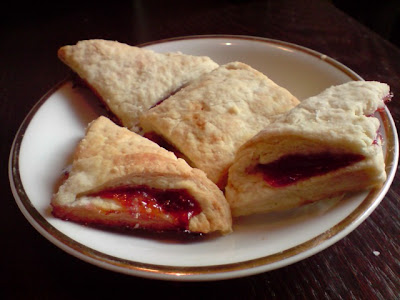 a jar of marmalade of your choice. Firm!

The recipe tells to shred the shortening, which is something I find literally impossible, so I cut it in small cubes instead. Then, add the flour and make crumbles. Finally, pour your beer, mix with your hand and knead to form a ball of dough. Let it rest in the fridge for 1,5 do 2 hours.

Divide the dough in half and roll into rectangular shape. Begin to cut it in squares (or rectangles, if impossible). Then pour about 1 teaspoon of marmalade in the middle of each square and fold it in half to create a triangle but DO NOT PRESS THE EDGES TO SEAL IT. The should be open and the marmalade visible after baking. If, like me, you cut out some squares that are rather rectangles, fold them to create squares - the will look like little books when done.

Repeat with the rest of your dough. Bake for 25-30 minutes - until golden - in 175C/300F. There is a big  - huge, actually - possibility that your marmalade will start to leak out and burn in the baking sheet, so don't place the cookies too near each other to prevent them in stick to bitter, caramelized jam. Cool down completely before serving.

These are delicious, but remember that the pastry is completely sugarless = not sweet at all. If you have kids or a sweet tooth you might consider sprinkling them with sugar before baking. I also thing that this recipe makes a great tart crust.
Posted by Lucyna Wegankiewiczowa at 12:13 PM

I am so intrigued by these cookies! Like really fascinated and I can't wait to try and make them. Thank you for sharing the recipe.

These sound so cool! I kinda want to see a picture before I try them, since I can't quite imagine what they look like, but I definitely want to try them!

First of all, thanks for having a Polish vegan blog written in English! I love what I'm seeing so far.

Now, if you are able to veganize chruściki, you'll be my all-time hero!

I can do it! I make them in Carnival. Wait a month or so, till after Christmas

That would be phenomenal.

And when I come visit Poland, I'm totally finding out where you live and having you cook for me. :)

No problem:) It's a beautiful city, worth staying.

Beer cookies! Do you prefer a lighter beer for these, or darker?

So, Azzahar -- any chance you feel like taking a shot at veganizing chruściki?

I'm totally fiending for a taste from my youth. :)

cardamomandcastiron - light beer will be better, but a dark one might give some interesting taste to the crust, so try both:)